Modules in Python are simply Python files with a .py extension. The name of the module will be the name of the file. A Python module can have a set of functions, classes or variables defined and implemented.

It is usually a good idea to split code into smaller modules for a couple of reasons. Primarily, modules can contain all of the code related to a particular coherent topic (e.g., all of the I/O functionality) without being cluttered by code related to something completely different (e.g., plotting). For this reason, it is common to see large classes get a dedicated module (e.g., geodataframe.py within geopandas). Secondarily, dividing code into appropriate logical units makes it easier to read and easier to understand.

The first time a module is loaded into a running Python script, it is initialized by executing the code in the module once. If another module in your code imports the same module again, it will not be loaded twice but once only - so local variables inside the module act as a "singleton" - they are initialized only once.

In our computer systems, we store our files in organized hierarchies. We don’t store them all in one location. Likewise, when our programs grow, we divide it into packages. In real-life projects, programs are much larger, package lets us hold similar modules in one place. Like a directory may contain subdirectories and files, a package may contain sub-packages and modules. But what distinguishes a package from a regular directory?

Packages are namespaces which contain multiple packages and modules themselves. They are simply directories, but with a twist.

Each package and subpackage in Python is a directory which MUST contain a special file called __init__.py. This file can be empty, and it indicates that the directory it contains is a Python package, so it can be imported the same way a module can be imported. This will define what gets brought into the namespace with the import statement.

If we create a directory called foo, which marks the package name, we can then create a module inside that package called bar. We also must not forget to add the __init__.py file inside the foo directory.

To use the module bar, we can import it in two ways:

In the first method, we must use the foo prefix whenever we access the module bar. In the second method, we don't, because we import the module to our module's namespace.

The __init__.py file can also decide which modules the package exports as the API, while keeping other modules internal, by overriding the __all__ variable, like so: 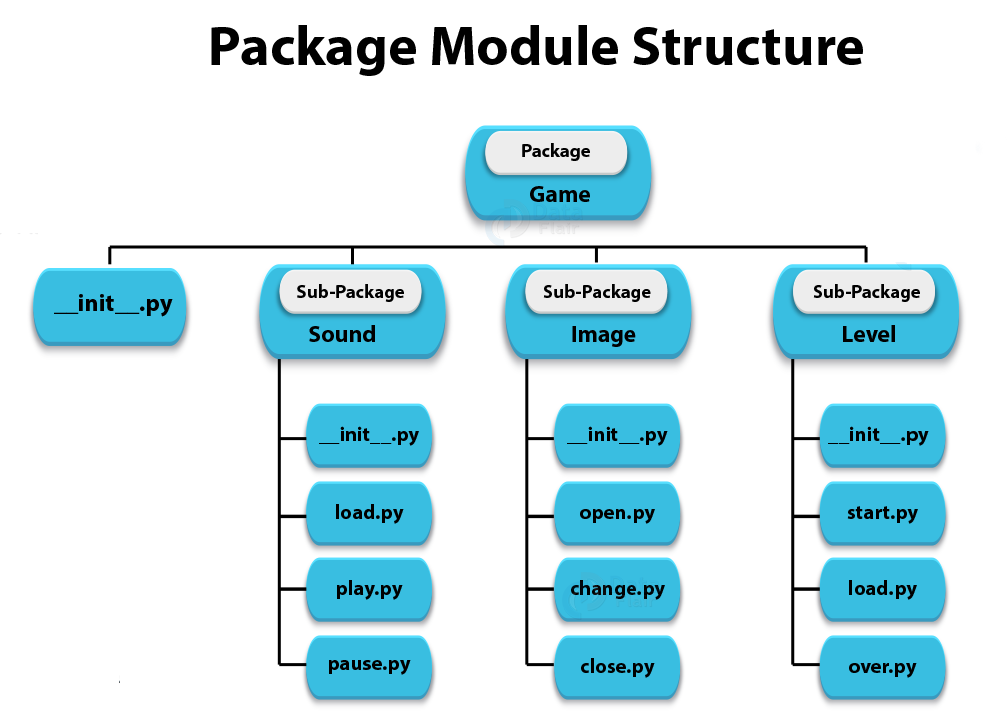 However, a good module structure for the developer may or may not be a good module structure for the user. In some cases, the user might not need to know that there are various modules underlying the package. In other cases, there might be good reasons that the user should explicitly ask only for the modules they need. That is what I want to explore here: what are the different use cases and what approach do they call for from the package developer.

Python packages come in a variety of structures, but let’s create a simple demo one here that we can use in all the examples.

It is composed of three modules: foo.py, bar.py, and baz.py, each of which has a single function that prints the name of the module where the function resides.

Your code as a Grocery store

Now is a good time to acknowledge that talking about import statements and package structures can be pretty hard to follow, especially in text. To help make things a bit clearer, let’s think about a Python package as a grocery store and your users as the shoppers. As the developer, you are the store owner and manager. Your job is to figure out how to set up your store so that you serve your customers best. The structure of your __init__.py file will determine that setup. Below, I’ll walk through three alternative ways to set up that file: the general store, the convenience store, and the online store.

In this scenario, the user gets access to everything right away on import example_pkg. In their code, they only need to type the package name and the class, function, or other object they want, regardless of what module of the source code it lives in.

This scenario is like an old-timey general store. Once the customer walks in the door, they can see all the goods placed with minimal fuss in bins and shelves around the store.

The convenience store shares a lot of traits with the general store. It has a relatively limited selection of goods which can be replaced at any time with minimal hassle. The customer doesn’t need a lot of signage to find what they need because most of the goods are easily in view. The biggest difference is that a convenience store has a bit more order. The empty boxes, brooms, and mops are all kept out of view of the customer and only the products for sale are on the shelves.

Shares all of the advantages of the general store, and adds:

I would add the following to the recommendations from the general store:

Anyone who has bought groceries online knows that ordering the right product can take some effort on the part of the customer. You have to search for the product, choose a brand, choose the desired size, etc. All of these steps, however, allow you to buy exactly what you want from a nearly limitless stockroom.

In the case of Python packages, in some cases, it might be more prudent to eschew the convenience of simply importing the entire package and instead force the user to be more clear about what pieces are being imported. This allows you as the developer to include a lot more pieces to the package without overwhelming the user.

There are (at least) three different methods that a user could adopt in this case.

** * ** These packages actually use combinations of different approaches in their __init__.py files. I include them here because to users, they are generally used à la carte (e.g., import matplotlib.pyplot as plt or import scipy.stats.kde).

The three scenarios I outlined are certainly not the only possible structures for a Python package, but I hope they cover most of the cases that anyone reading learning this from a blog might be considering. In conclusion, I’ll return to a point I made earlier: a good module structure for the developer may or may not be a good module structure for the user. Whatever your decision, don’t forget to put yourself in the user’s shoes even, or especially, because that user is most likely to be you.

Use 'import module' or 'from module import'?

Question: I've tried to find a comprehensive guide on whether it is best to use import module or from module import?

The difference between import module and from module import foo is mainly subjective. Pick the one you like best and be consistent in your use of it. Here are some points to help you decide.

Either method is acceptable, but don't use from module import * \
For any reasonable large set of code, if you import * you will likely be cementing it into the module, unable to be removed. This is because it is difficult to determine what items used in the code are coming from 'module', making it easy to get to the point where you think you don't use the import any more but it's extremely difficult to be sure.

How To Package Your Python Code