The first step in dealing with a file in Python is to open the file. To do that, you can just use the open() method, which will create a file object. Specifically, this method has a set of parameters for reading a file, but the two most used arguments are the filename and the mode.

Normally, files are opened in text mode, that means, you read and write strings from and to the file, which are encoded in a specific encoding. If encoding is not specified, the default is platform dependent (see open()). 'b' appended to the mode opens the file in binary mode: now the data is read and written in the form of bytes objects. This mode should be used for all files that don’t contain text.

In text mode, the default when reading is to convert platform-specific line endings (\n on Unix, \r\n on Windows) to just \n. When writing in text mode, the default is to convert occurrences of \n back to platform-specific line endings. This behind-the-scenes modification to file data is fine for text files, but will corrupt binary data like that in JPEG or EXE files. Be very careful to use binary mode when reading and writing such files.

It is good practice to use the with keyword when dealing with file objects. The advantage is that the file is properly closed after its suite finishes, even if an exception is raised at some point. Using with is also much shorter than writing equivalent try-finally blocks:

python width open file
Calling f.write() without using the with keyword or calling f.close() might result in the arguments of f.write() not being completely written to the disk, even if the program exits successfully.

modes for open and read 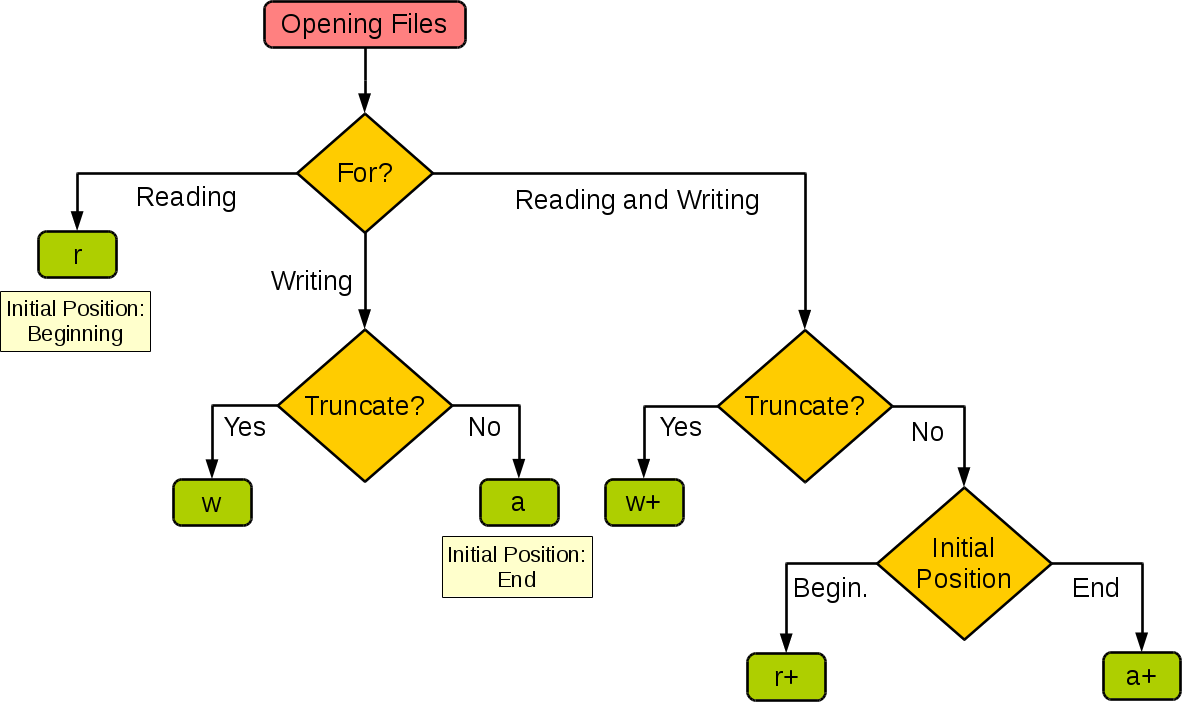 functions for reading and writing files

Suppose that we have the following text file named test.txt for the purpose of this tutorial. You can create one like the below in your Python working directory if you want to try these methods while following this tutorial.

To open this file, we can simply call the open() method like below. We specified the filename and the open mode. As you can see from the Terminal, a file object or a text stream (i.e. TextIOWrapper) is created.

The list above (i.e., cheat sheet 2) summarizes the common open modes with their intended uses. If the open mode is omitted, the default mode will be r.

To open the file in the binary mode, you need to append the letter b after the mode listed above (e.g., rb, rb+). The binary mode should be used when the file doesn’t contain text.

We can use the with keyword when a file is opened.

Using the with keyword allows the file to be properly closed automatically after the suite completes, even when an exception is raised during the process.

In the above code snippet, a few things are worth noting.

As you’re probably aware, we used the read() method just now. In this method, you can specify the size that you want to read from the file object.

When the size argument is omitted or set as negative, or set as an integer greater than the file size, all the file contents will be read.

We can also specify a size smaller than the file size. In the example below, by specifying the size to be 6, only the first 6 characters will be read for the text file.

If the end of the file has been reached after reading, an empty string ('') will be returned.

For the example given below, an empty string is returned by the second read() method, as the first call has completed the reading of the entire file.

We can also read individual lines by using the readline() method. This method will read the text for the entire line including the line ending (i.e., \n).

However, the \n will be omitted for the last line of the file, if the file doesn’t end in a newline. When reading has reached the end of the file, an empty string will be returned.

If you call the readline() method multiple times, the reading will be continued at where it was read last time.

Actually, the readline() method can also take in a size parameter, which will be used as a limit for reading the line.

In the code snippet below, readline(2) and readline(5) will read just 2 and 5 characters, respectively. Again, reading is continued at where it was read last time.

One more thing to note is that a blank line is returned as '\n' — a string containing only a single new line.

If you want to read all the lines with a single method, you can use readlines(), which will create a list of individual lines.

The readlines() method can also optionally set a size hint.

When it’s set as a positive integer, it will read that many characters (or bytes in the binary mode) from the file and enough to complete that line.

In our case, our first line is 29 characters. Thus, a size of 1 to 29 will lead to the reading of the first line, while 30 or greater will read both lines, as shown below.

However, how the new values will be written to the file is dependent on the open mode as summarized in cheat sheet 2.

For example, the w mode will truncate the file, and thus the file will only contain the new values. The a mode will allow you to append new values to the existing file.

The above code writes the specified string to the file after truncating the text before it was opened.

A side note is that the write() method will automatically print the number of characters written, which can be suppressed by assigning the returned value to an underscore:

After the writing action, you can see the current text of the file. As expected, only the new string is contained in the file.

We can also use the writelines() method to write multiple lines to the file.

This method will take in a list of strings as the parameter. How the lines are written (e.g., overwriting or appending) using this method is similar to the implementation of the write() method.

After executing the above code, the file’s text becomes 'Line 0\nLine 1' as read by the default read() method.

After you’re done working with the file, it’s always good practice to close the file by calling the close() method on the file object.

As shown below, before the file is closed, the closed method returns False, and it returns True after we call the close() method.

Change the stream position to the given offset. Behaviour depends on the whence parameter. The default value for whence is SEEK_SET. Return the new absolute position as an opaque number.

or in another words, whence mean:

In text files (those opened without a b in the mode string), only seeks relative to the beginning of the file are allowed (the exception being seeking to the true file end with seek(0, 2)) and the only valid offset values are those returned from the f.tell(), or zero. Any other offset value produces undefined behaviour.
Facebook Twitter LinkedIn Email WhatsApp vk.com Telegram RSS RedDit
comments powered by Disqus